Sorry about the posting gaps. Contesting preparation can be busy work.

On Wednesday, Tom (owner of the music shop Octave Above) called to say my new York leadpipe had ARRIVED!!!  And Lindley band member Paul Harrison reminded me London Symphony Orchestra principal trumpet Rod Franks was in town for a master class at Huddersfield University.  With these two pieces of news I greeted yesterday with some measure of excitement.

Sarah walked the kids to school and I grabbed the bus to town and dropped the cornet off with Tom and Stewart (who did the repair work).  I had not done my AM practice routine (on trumpet)  and the store didn’t have a practice room, so I decided to go practice at the university.  On the .75 mile walk back into town I contacted Murray Greig who teaches at “The Uni” and also plays Solo Trumpet with Opera North.  Murray was on his way to teach and to the Franks master class and invited me to have some coffee.  The day looked up even more.

I met Murray at the coffee bar inside the Fine Arts Building and he also arranged a practice room for me.  After I played for an hour, it was getting on towards lunch and I called Sarah to see if she would take the bus to town to meet me for some food.  “Sure but I’m not staying for the master class!” she said.  Ha!  I wonder why not?

It has been 10+ years since that master class and he has had major brain surgery (to remove a large tumor in 2002) but when he saw me I could tell he was trying to figure out why he recognized me.  He remembered me as soon as I talked about the master class at Rutgers, and he remembered meeting William Fielder (who recently passed away) and was one of the teachers there.  Fielder (who had taught Wynton) had left an impression on Rod by telling him his ideas about embouchure (which he got from Maurice Andre) were all wrong. Hmmmmm…….

After lunch with Sarah, I headed back to “The Uni” for the class and Sarah headed back home, happy to have seen me, but probably happier she didn’t have to listen to the class.  She also had to walk to get the girls from school.  (note:  I got out of the school walks at both ends of the day……..the day looked up even more!)

Rod’s class was great.  He hit all the major points about how he play 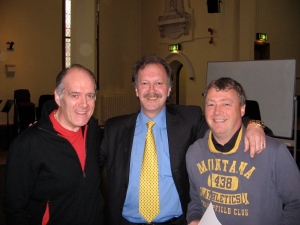 s, what he plays, how he does his job, all the movie recordings they have done (all the Star Wars stuff) and what he thinks young players need to know. He actually did his schooling at Huddersfield before his career took him first to Norway (Bergen Phil. I think?) and then the LSO.  And over the course of his class (and for my benefit) he managed to make fun of American’s and America 4 or 5 times.  Of course each time he said “No offense Bryan.”  (having been with B&R for 6-months, and studying with McCann, I’m very much over being offended by jokes about America and American’s)

Aside from the American bashing (did you know the movie Cutthroat Island, starring Gina Davis and featuring Rod on the soundtrack, tanked in the US because we are sexist and don’t like heroines as opposed to heros?) the class was quite interesting.  Obviously Rod is lucky to be alive much less functioning as a world-class trumpet player, musician, and teacher since he had the brain tumor removed in 2002.  His playing was, as you would expect, excellent.

Rod talked about having something like 17 bouts of Bells palsy in his face, and still functioning on the job.  In fact, yesterday the upper left part of his lip (covered by his mustache) was not functioning.  He combats this by doing isometric exercises with a golf-tee between his lips much the same way we do “the pencil” exercise.  He does it for 20-30 minutes/day while he watches TV and ALSO keeps a coin held in his left eye by squinting. These are facial exercises he was prescribed by his daughter who is also a physical therapist and cornet player.

He also talked about the legacy of former principal cornets of Dyke moving into the principal trumpet chair of the LSO.  He is 3rd, in a line of them.  His friend/teacher/colleague Maurice Murphy also played Top Man for Dyke.  So did Murphy’s predecessor, who’s name escapes me at the moment.  (anyone reading know his name?)

The class went on for 3 1/2 hours and it felt like the time flew.  5 students played and to finish, Rod brought out the 4-original trumpet parts to the Finale of the most recent Star Wars film.  The students had a go at the first 3 pages as Rod conducted.

I won’t go into the details of everything Rod said but it was great to see him again and listen to him play.  He did mention you can find him doing quite a lot of stuff on YouTube.  The LSO is doing master class videos by orchestra members and linking them to their website.  In particular he likes the class he did on Mahler 6 which they have put into 2 different videos on YouTube.

By 4:45 the class was over and I had a message that my cornet was finished so I walked back up to Octave Above.  Tom and Stewart were great with the horn and I can’t believe how much better it is!  York is making horns in the UK factory where Besson made my horn, and York still has all the specks for the lead pipe.  It came out great and Stewart’s work was first rate.  Stewart also fixed my 2nd valve slide which was both bent and leaking.  So basically I have a new horn.

Some of you may remember I did Napoli with Lindley last fall and was complaining about a double buzz on low C and some accuracy issues.  I’m happy to report it really wasn’t me.  The horn was a MESS.  I wish I had back all my performances on cornet the last 5 years.  This morning I played through 4 solos and both test pieces and it was EASY!  Even Sarah noticed a huge difference in my playing.  The timing couldn’t be better as The Yorkshire Areas are next weekend.  Lindley has rehearsals tonight, a double on Sunday, and then M, W, F next week with the contest on Saturday.  The dep has arrived for B&R so I’m just listening and taking notes now.

So……as I said, yesterday was a very, very good day!

Day 68/Set 2+3
My sister-in-law @emily4774 is an amazing person but also a loving and tireless advocate for her family. Can’t thank her enough for figuring out how to get me vaccinated. It did take her being online, with my brother-in-law @velezever also helping, at 4am every day for nearly 2 weeks........but they did it, and it worked. What an amazing team and family!
Day 66/Set 3
Loading Comments...
Comment
×
%d bloggers like this: