On Friday, B&R celebrated 2nd Horn, Ian “Dusty” Dust and his 30-years of continous membership with B&R.  Two facts we learned:  After 104 competitions, Ian has become the most decorated B&R player in the band’s history.  As long time Band Secretary, one of the things he added to the B&R Player’s Handbook was this phrase:  “Tradition isn’t a privilege, it is a responsibility”.

In celebrating Ian’s long tenure with the band it was very interesting to see former colleagues from the 30-years return for the meal and to talk in often glowing terms about their time in the band and sitting next to Ian every Tuesday and Thursday.  Some of these former B&R players have not performed with the group in 20-years.  But while they were involved, it was the focal point in their lives.

And it was funny too.  The legions of B&R players and supporters made a toast to Zoe (Ian’s wife) to thank her for all her support of Ian and his banding life. She responded by saying “And I want to say Thank You to B&R because if you had not forced him to get out of the house on Tuesday and Thursday nights our marriage wouldn’t have survived these 38 years”.

As you may have guessed, the current and former members never let anyone take themselves too seriously.  While Stephen Howes was remanicing about Ian’s first years with the band he said “Ian came to us on first horn but at the end of the first year he either volunteered or was asked to move to 2nd horn”.  Almost immediately there was a huge cry from at least 10 different people in the banquet room “ASKED!!!!”  They all yelled.

Congratulations Ian!  If you can hang on, soon you’ll be the longest serving band member in B&R’s history.  To be honest I think you are the one who has been “Living the dream.”

Of course, by the end of the evening most of us had a few pints in the system.  The photos below are of the people at our table and of Ian. 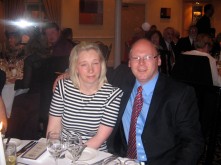 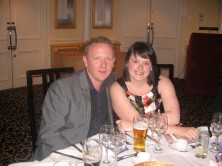 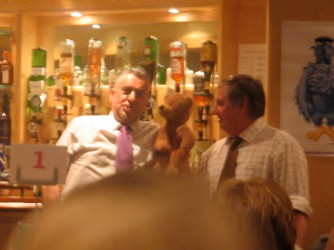